Sir Paul McCartney has congratulated his bandmate Sir Ringo Starr on his knighthood. The Beatles drummer has been made a Sir in the Queen's New Year's Honours List and now his bandmate - who received his own knighthood two decades ago - has sent a personal congratulations to his friend.

Uploading a picture of them both on his Twitter account, Sir Paul wrote: "Huge congrats Sir Ringo! Sir Richard Starkey has a nice ring to it. Best drummer best pal! X Paul (sic)"

Ringo's knighthood was announced on Friday (29.12.17), where he will be honoured for his services to music and charity work.

He said: "It's great! It's an honour and a pleasure to be considered and acknowledged for my music and my charity work, both of which I love. Peace and love. Ringo."

Meanwhile, Ringo previously revealed he is still living his dream.

He shared: "I love joy. I love the light. I'm still doing what was my dream at 13, and that's playing. I think that helps. I promise you this, though - I'm not this happy-go-lucky every day. But overall, my general demeanour is peace and love and joy ...

"What usually happens is with the writers I write with, one of us will have a line. I usually have a whole list of lines, and then we sort of just think what we're gonna do. The best [new track] to talk about is 'So Wrong for So Long.' Somebody said that to me in 2008, and I just thought, 'that's a great line,' and finally turned it into a record, into a track." 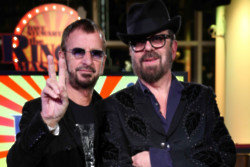