Ruby Rose needed "emergency surgery" following a stunt injury, as she says she risked "becoming paralysed" as a result of having "herniated two discs" in her back, 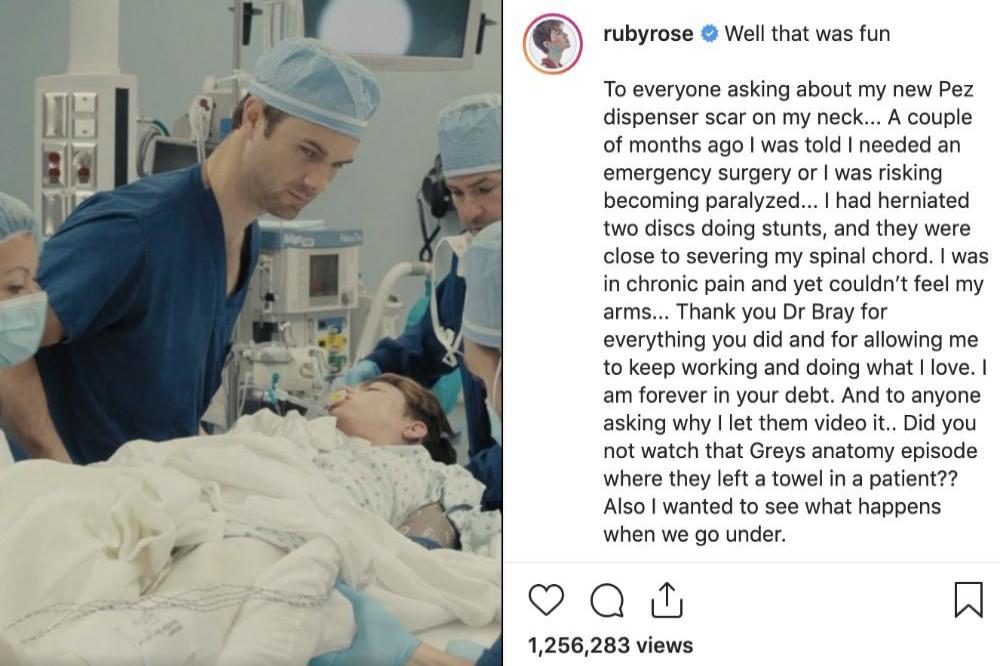 The 'Batwoman' star took to Instagram to share a video of her operation, which she has revealed she needed to undergo when she risked "becoming paralysed" as a result of having "herniated two discs" in her back whilst doing stunt on a movie set.

Alongside the three minute video, she wrote: "To everyone asking about my new Pez dispenser scar on my neck... A couple of months ago I was told I needed an emergency surgery or I was risking becoming paralyzed... I had herniated two discs doing stunts, and they were close to severing my spinal chord. I was in chronic pain and yet couldn't feel my arms... (sic)"

Ruby, 33, went on to thank her doctor for their work, and joked that she'd filmed the process to make sure medical staff didn't leave anything "in" her, like the plot of an episode of 'Grey's Anatomy'.

She added: "Thank you Dr Bray for everything you did and for allowing me to keep working and doing what I love. I am forever in your debt. And to anyone asking why I let them video it.. Did you not watch that Greys anatomy episode where they left a towel in a patient?? Also I wanted to see what happens when we go under. (sic)"

The former 'Orange is the New Black' star also shared another video to her YouTube channel, in which her doctor explained the surgery process.

He said: "She had dysfunction with balance and numbness down her arms, her reflexes were off. So we cleaned up both discs with a microscope and took fragments off her spinal cord.

"We cleaned everything up and put in two artificial discs in, so she'll have pieces that will twist, turn, bend and move like a disc, and will regain full range of motion. She can go back to stunts and workouts, and most importantly now she's safe."