Rebekah Vardy has confirmed her pregnancy on Instagram, with an amusing post about becoming a mother of five. 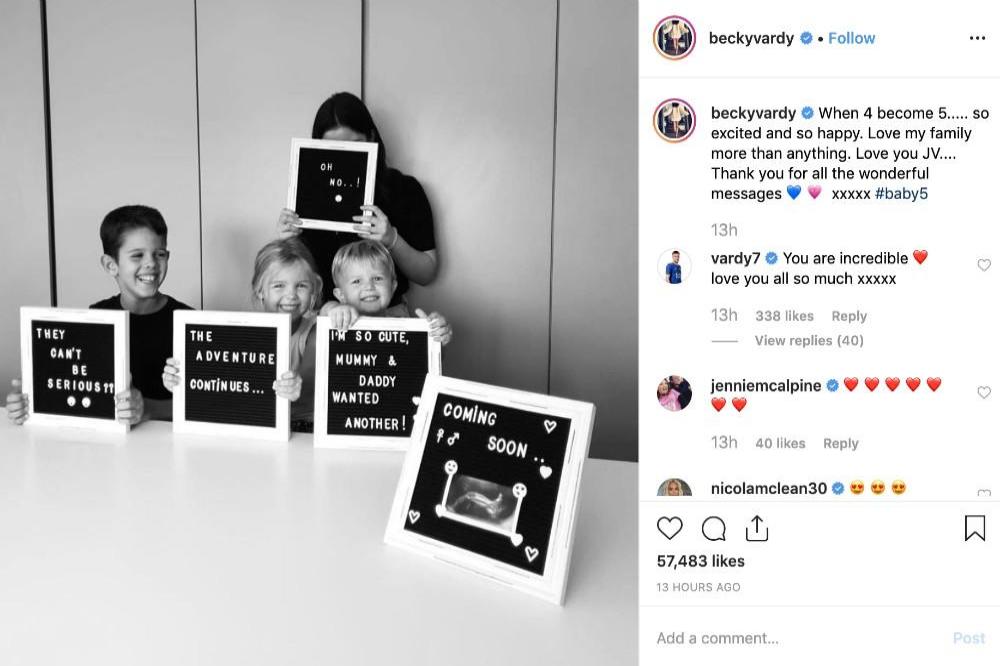 The 37-year-old beauty and her husband Jamie Vardy were revealed this week to be expecting their third child together, and in an Instagram post uploaded on Tuesday (27.08.19), the 'I'm A Celebrity... Get Me Out of Here!' star - who has Sofia, four, and two-year-old Finley with Jamie, as well as two children, Megan and Taylor, from a previous relationship - confirmed the happy news.

Rebekah's post took a lighthearted approach to her fifth pregnancy, and featured three of her children holding up boards with amusing messages on.

Taylor's read: "They can't be serious??", whilst Sofia's said: "The adventure continues...", and youngest child Finley's said: "I'm so cute, mummy and daddy wanted another!"

A fourth board featured a picture of Rebekah's ultrasound scan, and displayed the words "coming soon", whilst the mother-of-four stood behind her children with her own board which jokingly read: "Oh no!"

Despite her joke on the board, Rebekah couldn't be happier to be welcoming a fifth child into her family.

The caption on the post read: When 4 become 5..... so excited and so happy. Love my family more than anything. Love you JV.... Thank you for all the wonderful messages xxxxx #baby5 (sic)"

Rebekah and Jamie's baby news was announced this week by a spokesperson for the couple, who said the pair are "over the moon".

They revealed: "I can confirm that Jamie and Becky are delighted to be having another baby.

"Becky and Jamie are over the moon that she is pregnant again. They can't wait to welcome another member of the family.

"They've got enough kids for a five-a-side team now, and to be honest they'd probably be quite good."