Prince Jackson, the son of the late Michael Jackson, has praised his grandfather Joe Jackson as "an example of sheer willpower" after he passed away this week.

Prince Jackson has praised his late grandfather Joe Jackson as "an example of sheer willpower". 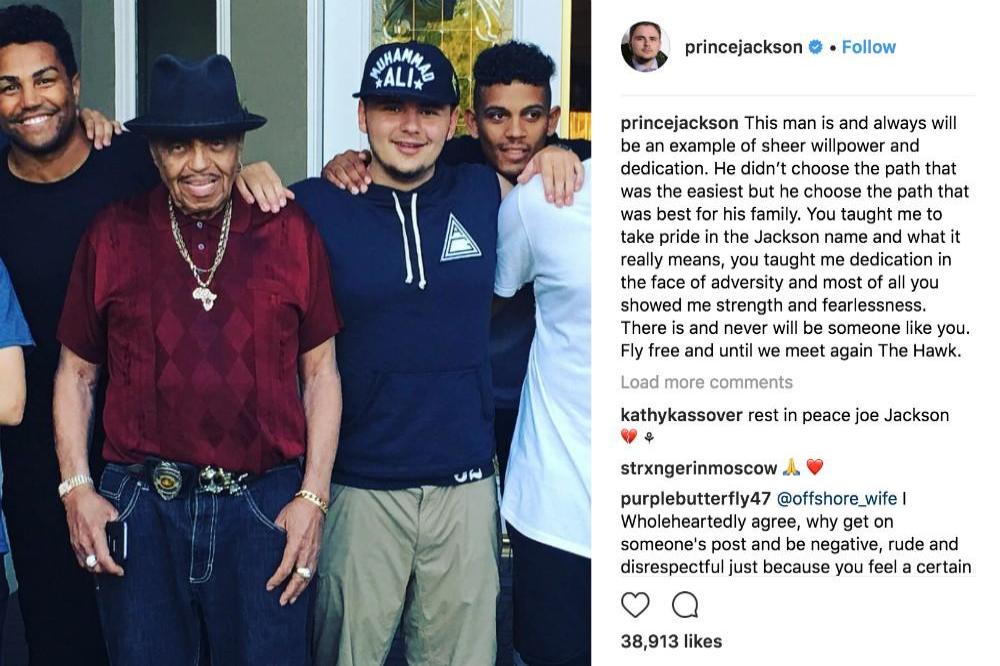 The 21-year-old son of late musical icon Michael Jackson has taken to Instagram to pay tribute to the Jackson family patriarch - who is best known for handling the careers of his kids including Michael - after he passed away on Wednesday (27.06.18) at the age of 89 following a battle with cancer.

Prince - who is the eldest of Michael's three children and has sister Paris, 20, and brother Blanket, 16 - posted a picture of himself with his grandfather and wrote: "This man is and always will be an example of sheer willpower and dedication. He didn't choose the path that was the easiest but he choose the path that was best for his family. You taught me to take pride in the Jackson name and what it really means, you taught me dedication in the face of adversity and most of all you showed me strength and fearlessness. There is and never will be someone like you. Fly free and until we meet again The Hawk. (sic)"

Meanwhile, 39-year-old TJ Jackson - who is the son of Tito Jackson and who became legal guardian of Michael's brood after he passed away in 2009 - said he would always "cherish" his grandfather.

The retired talent manager had been in hospital for some time, with his wife Katherine and some of his children and grandchildren by his side, and his passing was not unexpected as it was revealed hours before his death that he was "too weak" to even return to his Las Vegas home to live out his final days.

A source said: "He had planned to go to his home in Vegas to live out his final days, but that has not happened. Joe is very weak and getting significantly weaker. It's now a waiting game, and the end could come at any time."