Malin Akerman thinks it's "great" she got to see Jamie Dornan naked before the rest of the world, as they posed nude together for a ad campaign 15 years ago.

Malin Akerman says she got to see Jamie Dornan naked before the rest of the world.

The 'Billions' actress claims she got to know the '50 Shades Darker' star "very well" when they starred in a nude ad campaign for Abercrombie & Fitch approximately 15 years ago.

Sharing an image from the risqué photo shoot on Seth Meyers' late night chat show, the former model said: "I don't know if you guys notice, but that's Mr. Dornan before he was Mr. Grey.

"I got to see everything, it was great."

Asked why they were posing naked for a clothing brand, she admitted: "That was the whole question. I don't really know what we were selling.

"We got to set and after two shots the clothes just came off. [The photographer] didn't want any clothes on us.

"Needless to say we got to know each other very well. Very well."

Malin, who has three-year-old son Sebastian with ex-husband Roberto Zincone, previously posted a photo from the same shoot on Instagram two years ago, with the caption: "tbt to the very naked cover of Abercrombie circa 2002 (?) w none other than Mr Grey himself (sic)."

Northern Irish actor Jamie, who has two daughters, Dulcie, three, and Phoebe, 12 months, with wife Amelia Warner, worked as a top model for many years before carving out a career in Hollywood. 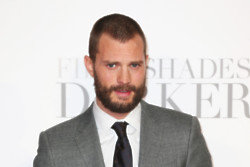