Jon Bon Jovi has received an honorary Doctor of Music degree from the University of Pennsylvania. 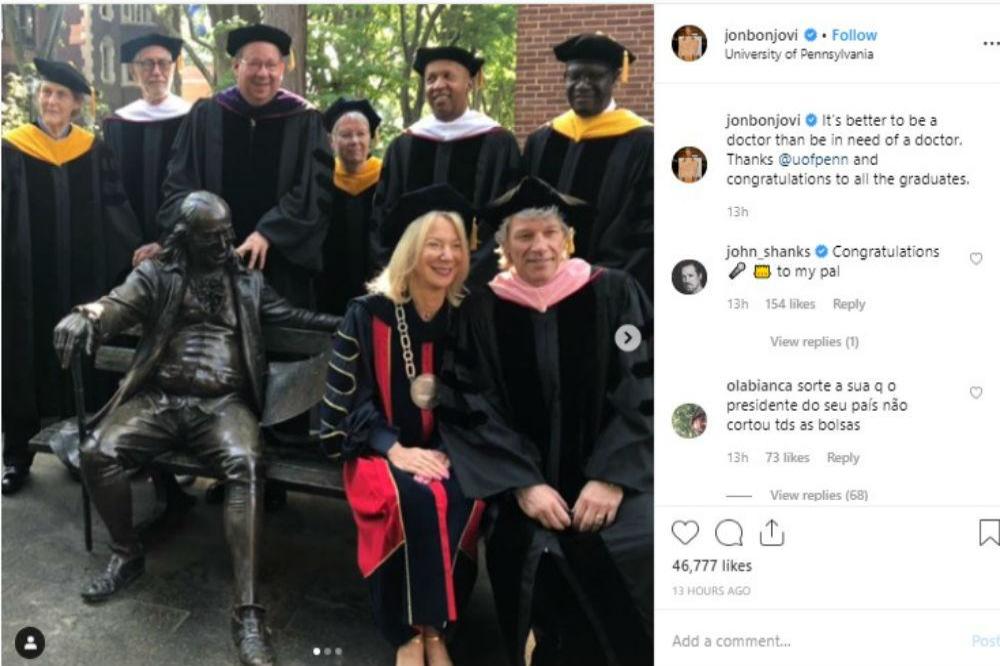 The 57-year-old rocker was recognised by the University of Pennsylvania at Penn's 263rd Commencement at Franklin Field in Philadelphia on Monday (20.05.19) for both his musical achievements and his humanitarian endeavours, including his Soul Kitchen community restaurants in New Jersey.

Alongside a photo of himself in a cap and gown next to other graduates, Jon quipped on Instagram: "It's better to be a doctor than be in need of a doctor.

Thanks @uofpenn and congratulations to all the graduates."

During the ceremony, graduates sang 'Livin' on a Prayer' and the university's president, Amy Gutmann, paid tribute to the singer's work.

She said: "The pay-it forward model (of the Soul Kitchen) serves in-need and paying customers with dignity and encourages their active participation through volunteer services."

This isn't the first time Jon has received an honorary degree as he was previously awarded a Doctorate of Humanities from Monmouth University in 2001.

The 'Say Something' singer logged on to Instagram, wearing his cap and gown, to thank Berklee college for the "incredible honour".

He captioned a picture of his diploma: "No Dream is too big!!! Keep chasing!!! Trust me... I'm a DOCTOR!! But, for real... THANK YOU to @berkleecollege for this incredible honour - I'm very humbled and grateful.(sic)"

The 'Work It' hitmaker - who is the first hip hop artist to receive this honour from Berklee - took to Twitter to share her excitement to get the prestigious academic honour along with a video of her dressed in cap and gown, dancing with her framed certificate.