Jon Bon Jovi and his son Jesse Bongiovi have teamed up with French winemaker Gerard Bertrand to launch their own brand of rosé wine, or "pink juice" as the rocker likes to call it.

Jon Bon Jovi has launched his own brand of rosé wine.

The 'Living On A Prayer'singer is a big fan of what he calls "pink juice" and, along with his son Jesse, has teamed up with acclaimed French winemaker Gerard Bertand to produce Diving Into Hampton Water.

Jon said: "Creating this wine with Gerard was just as creative as collaborating with another songwriter, Gerard uses his talents and wine knowledge just like a gifted musician. And working with my son on this has been an amazing experience."

Jesse said: "We'd tried rose from everywhere. But when we visited Gerard, we realised that there is an entire coastline in France that is producing some of the best-kept secrets on earth."

The idea came from the time the 55-year-old singer spent in the Hamptons with his family, enjoying a glass of wine, dubbed "Hampton Water" by 23-year-old Jesse.

After travelling the South of France and tasting a number of rosés, the 'Always' hitmaker - who, as well as Jesse, also has daughter Stephanie, 24, and sons Jacob, 15, and Romeo, 13, with wife Dorothea - found he and Gerard had more than just wine in common.

He said: "We just hit it off immediately. We found that we shared a love of family, food, friends, and of course, great wine and great music."

Diving Into Hampton Water will hit shelves this spring.

The Bon Jovi frontman joins a strong of celebrities who have their own wine, including Drew Barrymore, Fergie, Kate Hudson, Sting and John Legend.

Brad Pitt and Angelina Jolie also went into winemaking together before their split. 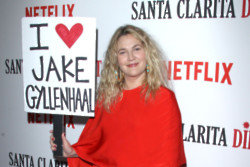