Jackie Stallone says botched plastic surgery has left her looking " like a chipmunk" with a "mouthful of nuts".

Jackie Stallone says plastic surgery has left her looking "like a chipmunk".

The 91-year-old star - mother of screen icon Sylvester Stallone - has had countless surgical procedures over the years, and regrets how they have left her looking.

When asked if she still has cosmetic surgery, she told website MailOnline: "I do and actually I've got too much, I look like I've got a mouth full of nuts, it's [cosmetic filler] Juvederm , too much of it. I feel as though I look like a chipmunk.'

Explaining Juvederm, she added: "It plumps you up but it looks like you have a mouth full of walnuts.

"I've had chemical peels, I've had three of those and about 50 injections."

However, Jackie is against Botox injections, fillers which reduce wrinkles but can leave the face looking stiff.

She added: "No Botox, I don't need that, what I want Botox wouldn't help. I don't have wrinkles in my forehead, I genetically don't have that, that's something I can be thankful for."

Although she lives in the Los Angeles suburb of Santa Monica, Jackie does not visit doctors in nearby Beverly Hills for her surgery, as she doesn't trust them.

She added: "I'm all for everything to make you look good - anything and everything. But most of the plastic surgery in Beverly Hills is rotten. I have seen on TV and in person the biggest hacks. I will go to other states.

"Just because it's Beverly Hills and they do the stars, but do you see what the stars look like? They look like they've been struck by lightning don't they?"

Jackie is also fit and healthy, attending tap dancing classes, working with a personal trainer and playing the piano every day, as she wants to set an example to other senior citizens.

She said: "u have to be a role model for seniors. And actually I became a role model for the movie stars at 50, because what they dread more than anything is getting old and shot. But I get more popular as I get older

"I use a bag of spinach a day, every morning for breakfast I steam a bowl of it and boil an egg on it. That's the secret to my longevity." 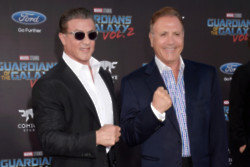