George Michael's family have vowed that his ex-lover Kenny Goss will not get a penny from the late star's estate after the art dealer launched a High Court claim for an allowance.

George Michael's family have vowed that his ex-lover Kenny Goss will not get a penny from the late star's estate. Kenny, who was George's partner from 1996 to 2011, was not left anything in the singer's will following his 2016 death and recently launched a High Court claim for a reported £15,000 a month, leaving George's family furious and upset.

A source told The Sun on Sunday: "They are angry about this and think Kenny is being heartless and disrespectful.

"They think that — if George really meant something to him — he would let him rest in peace instead of trying to drag his name through the courts.

"They think Kenny is chancing his arm. They've said they don't want to give him a single penny."

Kenny received a generous allowance from the ‘Careless Whisper' singer and has insisted his former lover was “not in his right mind” when he made his will.

He also claimed he was reliant on George's money after giving up his career to look after the former Wham! singer and so should still be provided for.

A source previously told The Sun newspaper: “During their final years together, Kenny was effectively a stay-at-home husband, and almost entirely looked after financially by George.

“His argument is he gave up his own career to focus on his relationship, and also set up a charitable foundation alongside George.

“He was essentially given an incredibly generous allowance which he came to rely on.

“Kenny believes, as George's most significant other half, he is entitled to that still and is contesting George wasn't in his right mind when he made his last will.”

Kenny is suing under the Inheritance (Provisions for Family and Dependents) Act 1975 and initially named George's dad, Kyriacos Panayiotou and his sisters, Melanie and Yioda in the court paperwork.

However, Melanie died last December, so the Texan must file a death certificate or notice of discontinuance before the documents will be publicly revealed.

An amendment was made last month but a hearing date has yet to be set after the coronavirus pandemic caused a court backlog.

George left most of his £97.6 million fortune to his close family and friends in his will, with his partner at the time of his death, Fadi Fawaz, also left out.

The hairdresser was eventually evicted from his famous lover's London home last year after repeatedly defying requests to leave. 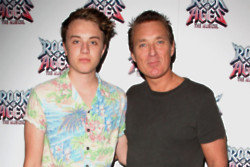