Dennis Quaid quit drugs after having a 'white light' moment

Dennis Quaid had a "white light" moment which convinced him to quit drugs.

The 62-year-old actor battled with substance abuse, and in particular cocaine addiction, in the 1970s but he can recall having a vivid moment of clarity in which he realised he'd be dead in "five years" if he didn't get clean.

Speaking openly about his drug use, Dennis - who has 24-year-old son Jack Quaid with his ex-wife Meg Ryan and nine-year-old twins Thomas Boone and Zoe Grace with his estranged wife Kimberley Buffington - said: "It starts out fun and then there's fun with problems, and there's just problems. I had one of those white-light moments - I saw myself dead in five years or at least losing everything I had worked for and wanted in life, and so I put myself in [a treatment centre] for 28 days and I did everything they said."

The 'Fortitude' star admits he found it harder to quit cocaine for good than he did to give up alcohol and marijuana.

He explained in an interview with Radio Times magazine: "I was able to quit drinking and smoking pot for the next ten years. Cocaine, though, was like a little devil on your shoulder saying, 'Oh, come on...' "

In the candid chat, Dennis also revealed he and second wife Meg - who he was married to for 10 years from 1991 to 2001 - have managed to remain friends since their break-up, something which he thinks is very important.

When asked if he has a good relationship with the 55-year-old actress, the Hollywood star - whose first wife was P.J. Soles - said: "Yes. You have to be after a while. If you're bitter still after 15 years - and still holding grudges - something's wrong with you, not with them." 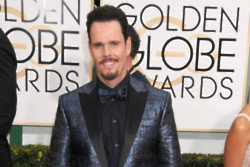