Dean McDermott doesn't have meningitis but is battling with pneumonia and is being kept in hospital for now. 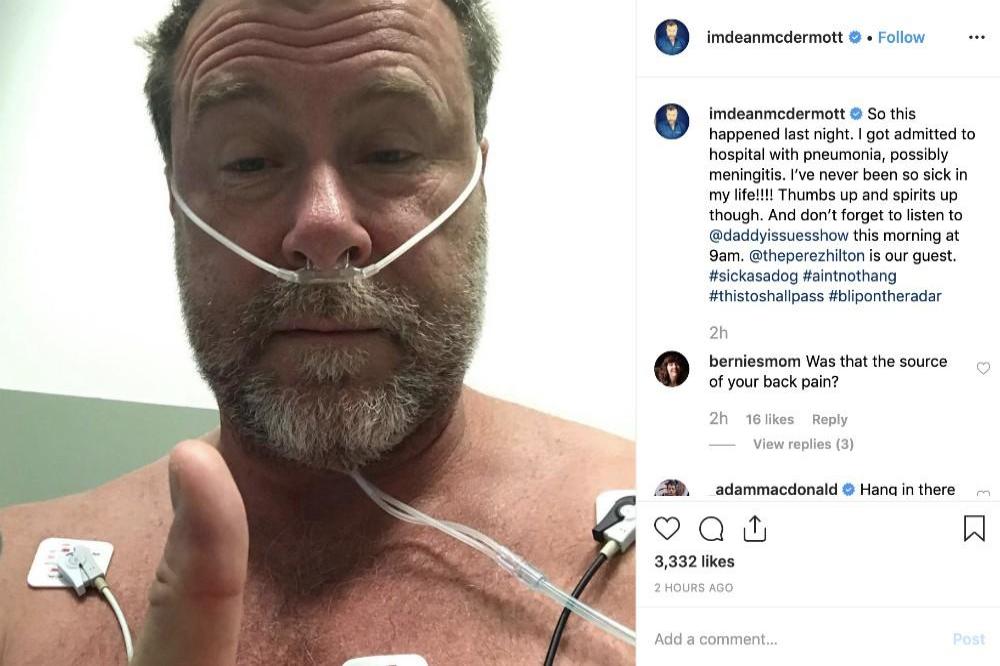 The 52-year-old actor has spent the past two days in hospital after doctors discovered he was suffering from an infection and, although they were initially concerned he had contracted the dangerous disease that can kill, they now think he's just battling with pneumonia and are keeping a close eye on him.

Taking to his Instagram account, he said: "I just want to thank everyone from around the world for the love, support and well wishes. I am currently batting (hopefully just) pneumonia and am under close medical care but am staying positive and strong. I can't wait to be back in action and reunited with my beautiful wife Tori Spelling and kids and back in the studio with my boys Nicky Paris and Adam Hunter at The Comedy Store recording for #DaddyIssues! (sic)."

It comes after Dean - who has five children Liam, 12, Stella, 11, Hattie, seven, Finn, six, and Beau, two, with Tori - frightened fans when he said doctors were worried he may have meningitis after a series of tests pointed towards it.

He said at the time: "So this happened last night. I got admitted to hospital with pneumonia, possibly meningitis. I've never been so sick in my life!!!!

"Thumbs up and spirits up though. And don't forget to listen to @daddyissuesshow this morning at 9am. @theperezhilton is our guest. #sickasadog #aintnothang#thistoshallpass #blipontheradar (sic)"

The 'Chopped Canada' star first started to feel under the weather last week when he shared a video of himself in bed at home battling a high fever.

"How'd I get the 102 fever?? Courtesy of [my son] Finn McDermott. Needless to say it ruined the family's plans to fly to Vancouver today. (sic)"

Dean then added he was becoming a "crusty old man", after admitting he'd thrown his back out whilst simply picking up a towel to dry his face.

He captioned the video: "I get really p***ed off when I can't do things and move the way I want. And I'm already ornery as it is!! What's the lamest way you've injured yourself?? Please share. I need a laugh. #sick #backsout #injury #fever #grumpy #crustyoldman #ornery #blah #ivethrownmybackoutandicantgetup. (sic)"