Claire Richards will only try on new clothes in the privacy of her own home.

The Steps singer has seen her weight fluctuate from a size 8 to a 20 and though she's happy with her body now after shedding over 80lbs, she still won't try on clothes in stores.

She admitted: "I never try on clothes in changing rooms.

"I'll always buy them and try them on at home. It's a habit I got into when I was bigger."

Claire - who suffered from anorexia and bulimia in her 20s - admitted she still finds her relationship with food a "daily struggle".

She said: "I think about the impact it's had on me in the past, and it is a daily struggle.

"There's not a day that goes by when I don't think about food. But I've got to a point where I've managed to maintain my weight for nearly five years now, so I feel like I've got to a place where I'm alright."

And the 'My Heart Is Heading Home (This Christmas)' singer - - who has children Charlie, 11, and Daisy, eight, with husband Reece Hill - blamed Steps splitting up in 2001 for her weight spiralling out of control.

She told Closer magazine: "I was always small but I got big after Steps split up. That's when I struggled. I overate and that was why I became the size I was. I don't eat that much any more."

Claire recently admitted she can be "easily led" and it doesn't take her long to lose any resolve and indulge in her favourite things.

She said: "It's never easy when you're out for dinner with friends, trying to pick a healthy choice, and someone goes for the naughty option - it makes you want to indulge too...

"Some people are always going to choose the healthy option because they are very disciplined, and others, like me, are easily led and don't need an excuse to eat.

"There may be an element that you don't want to look too uptight in front of your friends, but really, I think it's a convenient excuse and nothing to do with friends at all.

"You can't blame them if you want that unhealthy meal. Even if my friend is ordering a salad, I'll be like, 'Well, I'm having a burger.' " 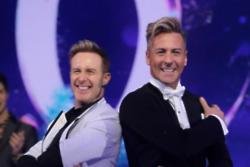