Brian Austin Green has admitted he didn't have a crush on his co-star Tori Spelling when they were teenagers on 'Beverly Hills, 90210'.

Brian Austin Green didn't have a crush on co-star Tori Spelling during their time on 'Beverly Hills, 90210'.

The 46-year-old hunk portrayed David Silver on the hit show - which was recently rebooted after 19 years - and revealed whether or not he was attracted to his on-screen girlfriend (Donna Martin) when they were teenagers.

Brian insisted he is a "monogamist" dater and was with other people during their time on the programme.

In an AOL Build Series interview, he replied: "No, no.

"We were kids, we were doing a show - Tori's awesome, we had a lot of fun.

"But I'm on of those serial, monogamist daters. "When we started doing the show, I started dating Tiffani [Thiessen] not too long after.

"We were together for a few years.

"Then she came on the show.

The actor - who has Noah, six, Bodhi, five, and Journey, three, with Megan - might be going strong with his wife now, but the couple were set to divorce four years ago.

In April, their divorce was officially dismissed and

Brian noted he and Megan were much stronger together since having split and reconciled.

He said; "I don't know what the secret is. Just stick it out. Like fighting and making up, believing in each other.

"I've dated people before and you kind of get to that point where you go, 'You know what, I don't feel the same way,' and I've never reached that with her. I mean we fight, we disagree on things. But I don't want to go anywhere and she doesn't, you know? So we stick it out."

Megan previously filed for divorce on August 21 2015 after five years of marriage to the 'Don't Blink' star, but reconciled with him in 2016 when they announced they would be welcoming their third child, Journey. 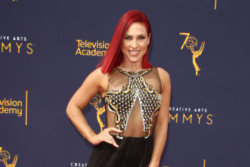